skip to main | skip to sidebar

It has been brought to my attention that on the post about head lice impostors, I forgot to actually show you a picture of the real deal. So, here is a picture of an adult louse. Like any insect, it has 3 pairs of legs. Each leg has a lovely hook that has been designed to grab on to human hair. Baby lice (nymphs) look like this, but they are smaller and can even look like a black or red speck of pepper. Because they are kind of see-through, lice blend in well with most hair colours (they look darker on darker hair). Sometimes, you will s

ee that lice are darker in their nether regions - that's because they are full of your blood!
The lice life begins in an nit (egg) which will hatch after 7-10 days. Then, they are nymphs (I call them teenagers) and it will take them around 7 days to grow into egg-laying bugs. Once reaching adulthood, lice can crawl around your head for around 30 days. In other words, the complete life cycle is around 30-50 days.
Harvard U. has great information page on head lice, which include the following lovely pictures of nits at different stages.
Once an egg is hatched, the removal of the egg shell is not necessary, but I do it anyway, because I would hate to miss something. As you can see, the nits even take on different colours depending on their stages. In my fair-haired son, nits can look quite dark. In a dark haired person, nits can look white. That's why I just pick every nit. Remember, nits can look like other things, but if the object moves, it is not a nit.
As I have said before, lice can't fly (no wings), they can't jump (no Nike shoes), and they hang out on human hair only. And whether sober, or on drugs (the pesticides in lice "shampoos") the louse looks the same - alive. So you gotta pick. Good luck. 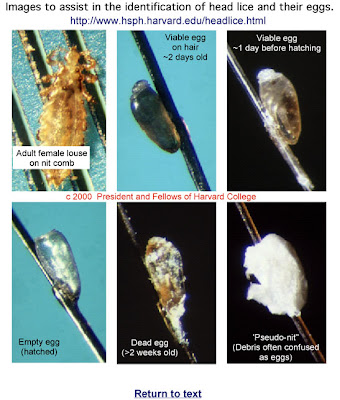 Posted by Cathy, the Nice Lice Lady. No comments:

You are the secret to your success.

Use your imagination for just a moment. Let's say your home had a cockroach problem - an infestation. What would you do? You would call an exterminator. What if the exterminator sprayed your house with pesticides and then told you that the spray wouldn't kill the cockroaches right away. Yuck. Then, what if the exterminator told you that you had to go and catch every roach, one by one, to prevent infestation from happening again. I know what I would think - I would think, "Why the heck did I pay that guy when I'm the one who has to solve the problem?"

This is how I feel about the makers of lice "shampoos". They tell you that their pesticides are necessary, but then, and I quote from the Nix website, "If your child has been diagnosed with head lice, you must remove every last one of them, including their eggs, to prevent reinfestation." And then you remove every louse and nit (which is what really solved the problem) and you declare, "The shampoo worked!" Right.

Don't fall for their lice advice. Since you have to go straight to the source of the problem anyway (i.e. you have to remove the lice manually), skip the middle man. Forget the "shampoos". If you really want to utilize a "middle man", I'm your gal.
Posted by Cathy, the Nice Lice Lady. No comments:

Hair Colour: Will Your Lice Dye For It?

With all my talk about the harmfulness of chemicals, I have a confession to make. I dye my hair. Just did it again last night. Am I hypocritical about the harmful effects of the chemicals in lice "shampoos"? I don't think so, because (a) I only dye my own hair, not the hair of others and definitely not the hair of children, and (b) the claims on the hair dye box are fulfilled - the product does what it says it will do and my grey hair is covered. If the results of lice "shampoos" were even close to what was promised, I might say that using them was worth the risks. But they aren't and you still gotta pick and comb.
A woman recently told me that she will never get head lice because she dyes her hair. Now, I've been colouring my hair for a long time, and I've had head lice before. Some people advocate using hair dye as a treatment against live lice that are already on your head. On the Internet, you will find people that seemingly support this with their own anecdotal evidence. I've worked with people who have tried to use hair dyes as a pediculocide. Sorry, didn't work. I think that I will do some of my own experiments. If the guy at Harvard can be quoted all over the Internet for throwing 6 lice into some olive oil, perhaps I can do some groundbreaking "research" in the area of hair dye and its actual effects on lice and nits.
Or not. Hair dye is still full of chemicals that many people have serious reactions to. And if lice have adapted to the chemicals in the "shampoos", then they probably have adapted to hair dyes. I'll forget the research grant money. I'll just pick and comb instead.
Posted by Cathy, the Nice Lice Lady. No comments:

"Help! I just found out we have head lice!" Click here for more info.

Click here for basic information about headlice, or check out one of the links below.

Learn how to check for head lice here.

Find out how to remove head lice here.

Find out why I DO NOT guarantee my work here.

Cathy, the Nice Lice Lady.
I have 14 + years of lice/nit picking experience and would love to come to your home and assist you or your family with lice/nit removal. UPDATE: I am not currently providing any in-home services nor am I providing any consultation or replying to comments at this time. Please review the different posts for more information about how you can address the problem of head lice without expensive treatments. I know it feels like a lot but it's just head lice. Take it one step at a time. Breathe. You've got this.